Twenty-four people have been arrested during a Police Scotland led, internationally co-ordinated operation targeting an organised crime gang suspected of human trafficking for the purposes of sexual exploitation.

Ten individuals were arrested in the UK in connection with offences related to serious and organised crime and human trafficking. Fourteen suspects are being held by Romanian police.

A number of potential trafficking victims were also recovered from several of the addresses in the UK and Romania.

Various locations were targeted in the early hours of this morning (Wednesday 9 September) in a joint day of enforcement involving simultaneous deployments across Scotland, England and Romania.

During the operation police attended four premises in Glasgow and Aberdeen, five in England (Leicester, Coventry and Northampton) as well as 23 addresses across Romania.

Detective Inspector Adrian Wallis, who led the operation, said: “Today’s enforcement action was the result of a lengthy investigation, with Police Scotland working alongside our counterparts in Romania.

“The arrests made today are the result of working closely with our partners in the NCA and officers in Romania over the last 12 months, to identify those involved in this exploitation.

“The investigation isn’t over yet, however, today’s action should send a very clear message: trafficking won’t be tolerated in Scotland, and we will continue to work with partners, nationally and internationally, to identify those involved in slavery and exploitation and to bring them to justice.”

“Human trafficking, exploitation and modern slavery has no place in Scotland. Organised Crime Groups who enslave and traffic people do it for no other reason than financial gain. People are treated as a commodity that can be bought and sold, and the traffickers have no thought or consideration for the impact of their actions on their victims or for the communities in which the victims are exploited.

“Borders are meaningless to traffickers. Their illegal trade has a global reach and crosses national and international boundaries which is why our response has to be co-ordinated across agencies and through international co-operation.

“We continue to build our relationships with law enforcement agencies in other jurisdictions such as the Romanian Authorities and we continue to develop these partnerships through the National Crime Agency. International co-operation has never been more important to allow us to tackle trafficking gangs wherever they are and wherever our investigation leads us.”

“We work with partners in the UK and overseas to pursue offenders and safeguard victims at home and abroad and today’s activity demonstrates that in action.

“But we still need the public’s help. Modern slavery victims are often hidden in plain sight, and we need the public to recognise the signs and report any suspicions they might have to the Modern Slavery Helpline or the police.”

His Excellency Dan Mihalache, the ambassador of Romania in the UK, said:

“It is a great pleasure to record today another major success in the field of police work in times when crime sees no borders and its sophistication increases day by day. 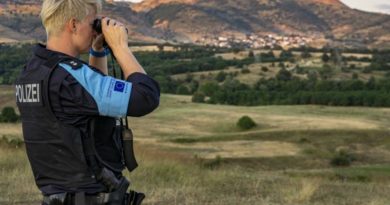 Frontex launches its second operation outside the EU

47 Arrests for Smuggling Moroccan Citizens to the EU